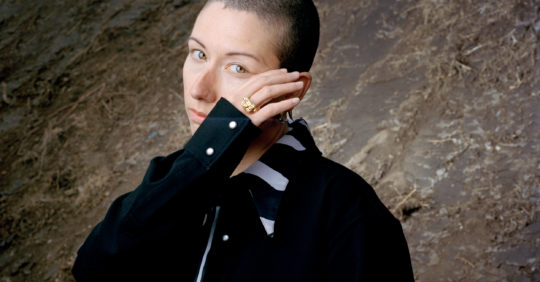 NZIRIA is an experimental project by artist Tullia Benedicta.

NZIRIA integrates the main forms and themes of the Neomelodic song, while regenerating the cis-heteronormative scenario. Through a powerful and androgynous singing, they reinterpret the
stereotyped, almost archetypal stories of the Neomelodic genre, welcoming narratives of the LGBTQI+ community and singing of queer love and mercurial identities.

NZIRIA debuted on Gabber Eleganza’s imprint Never Sleep with a full-length titled XXYBRID. Recorded during a period of worldwide lockdown, the album represents the artist’s psychomagic act to redeem their Neapolitan origins and to reinterpret some of the topoi of the Neapolitan culture.

Through the album, NZIRIA re-appropriates the Neapolitan dialect, which they learnt from their grandparents: the word itself, ‘nziria, is an almost untranslatable dialect word, indicating the obstinate and unprovoked tantrum of children when they’re tired.